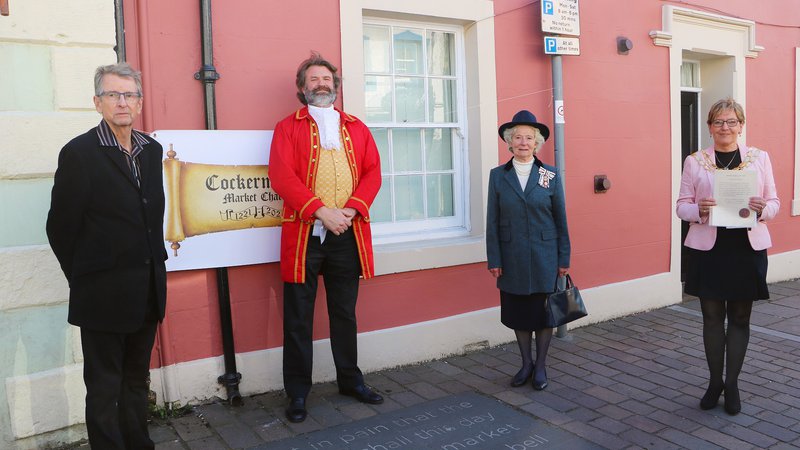 The 800th anniversary of a market charter being granted to Cockermouth has been celebrated during a special ceremony yesterday (Wednesday, May 19th).

It was on 19th May 1221, King Henry III granted the Manor of Cockermouth a charter to hold a Saturday market and later in the same year - on 20th November - a revised charter was issued for a Monday market.

To celebrate the historic milestone, the Cockermouth Civic Trust organised an event whereby the Lord Lieutenant of Cumbria, Claire Hensman, representing the Crown, ceremonially handed over the market charter to the town once again. The charter – which is now officially held by Allerdale Borough Council - was handed to Cockermouth’s mayor and town councillor Julie Laidlow in Market Place after the town crier rang the market bell

It is hoped that a number of events will be organised over the course of the year to further celebrate the anniversary.

“Cockermouth is known as a Georgian town because of the predominance of Georgian architecture in the town centre. However, the town’s history and town centre layout date from medieval times, following the building of our Norman castle.

“Cockermouth was granted a Royal Market Charter in its early history and we in the Civic Trust feel that the 800th anniversary is well worth celebrating, contributing to a sense of pride in our heritage. We have all just lived through a difficult year and we thought that having something to celebrate might help lift people’s spirits, so we hope that there will be more anniversary celebrations later in the year as the Covid restrictions are eased.”

Allerdale Borough Council is in the process of exploring the possibilities of introducing new markets in the area, including in Cockermouth.

“Markets can play a key role in creating additional vibrancy in our town centres and are also a great platform for new local businesses to take their first steps.

“In line with our Council Strategy, it is the ambition of the council to introduce new outdoor markets in the borough and we will shortly be launching a consultation into the reintroduction of a regular outdoor market in Cockermouth.”

Allerdale Borough Council also runs markets in Workington, Silloth and Wigton and any traders wanting further details about having a stall at them – or at a potential future Cockermouth market – should contact Markets Manager Phil Byers on phil.byers@allerdale.gov.uk.

The council is also busy planning this year’s Taste Cumbria event which is scheduled to run in Cockermouth between September 24 and 26.