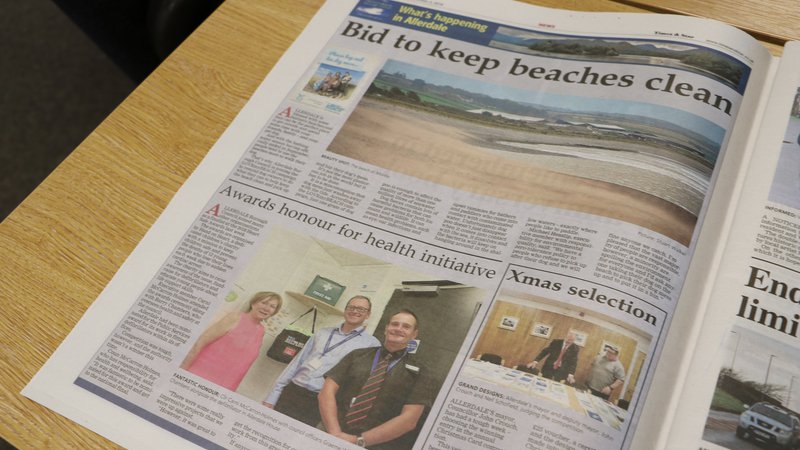 Each week we publish a column in the Times & Star about what's been going on in Allerdale's communities. This week we're talking about our upcoming self-build housing event and the work we're doing to bring empty homes in Allerdale back into use.

Allerdale is blessed with some fantastic beaches and they can be the perfect place to get outside and spend some time with your friends, family – and your pet dog.

And with the bathing water season officially ending in September, people tend to use the beaches more to walk their dog.

That’s why Allerdale Borough Council is joining the LOVEmyBEACH campaign to remind dog owners to do what they can to help keep the beach clean and pick up and bin their dog’s mess. It’s not the most glamorous job in the world but it has to be done.

It is a misconception that dog mess just washes away with the tide.  According to the LOVEmyBEACH campaign, just one gram of dog poo is enough to affect the quality of more than one million litres of seawater. Dog faeces contain lots of harmful bacteria that can cause problems for both humans and wildlife. It can mean health problems, such as eye/ear infections and upset tummies for bathers and paddlers that come into contact with contaminated water.

Unfortunately dog poo doesn’t just disappear when it comes into contact with the sea, it dissolves and the bacteria will keep on hanging around in the shallow waters – exactly where people like to paddle.

Michael Heaslip, Executive member with responsibility for environmental quality, said: “We have a zero tolerance policy to people who refuse to pick up after their dog and we will fine anyone we catch. I’m pleased that the vast majority of people are responsible, however, a minority are spoiling the environment for everyone and I’d ask anyone taking their dog on the beach to pick their dog mess up and to put it in a bin.”

Allerdale Borough Council joined many other organisations as a finalist at the 2018 Heart Safe Awards last week.

The awards are organised by the children’s charity, Hand on Heart, is a dedicated children’s charity with a mission to keep children safe and prevent the deaths of 12 young people who lose their lives each week due to sudden cardiac arrest. The aims of the charity is to raise awareness of the issue, fundraise for defibrillators and educate young people of life support skills.

Executive member Carni McCarron-Holmes attended the awards ceremony along with Barry Chambers, who oversees health and safety at the council.

Allerdale had been nominated for the Public Services Award for its work in fitting defibrillators within its offices. Unfortunately, competition was tough, and the authority wasn’t a winner this time.

Cllr McCarron-Holmes, who has responsibility for health and wellbeing, said: “It was fantastic to be nominated for this award and get to the national final. There were some really impressive projects that we were up against. However, it was great to get the recognition for our work from this great charity.”

If anyone is interested in finding out more then can go to the Hand on Heart website: https://www.handonheart.org/

Allerdale’s mayor, Cllr John Crouch, has had a tough week – choosing the winning entry in the annual Christmas Card competition.

This year’s decision has been even tougher as there has been a record number of entries - with 27 schools sending in over 1,200 designs.

Cllr Crouch was joined by Deputy Mayor Neil Schofield to go through each entry and choose a winner. The winner will get a £25 vouches, a certificate and design will be made into the mayor’s Christmas card. Due to the large number of entries, there are also prizes for second and third prize.

Cllr Crouch said: “I’d like to thank all the kids who submitted a design this year. It has been fantastic to get so many entries, and they are all so good. This has made deciding on a winner really hard.”

The winners will be announced in the coming weeks.