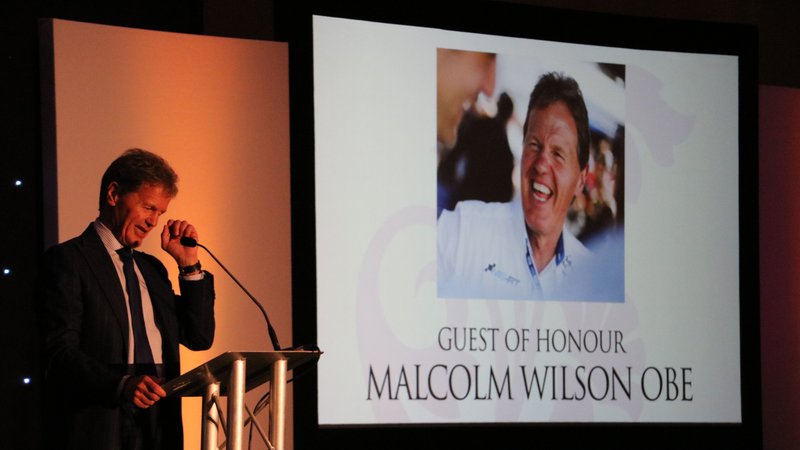 A total of £3,100 has been raised for a West Cumbrian charity by generous guests at Allerdale Borough Council’s annual Civic Dinner.

The event, which took place on Friday night at the leisure centre in Workington, saw Malcolm Wilson OBE attend as guest of honour. The M-Sport Director was made Freeman of the Borough by the Council earlier this year, due to the success of his company and the impact it has had on the local economy.

Over 200 guests, including local businesses and dignitaries, packed the sports hall of the leisure centre for a formal dinner, charity auction and prize draw, to win donations including sporting experiences at Workington Football Club, Workington Rugby League and M-Sport, as well as surprises from Allerdale businesses, like a Sealy bed.

Local companies played their part in the event too. Kirkup Butchers provided the food and Tractor Shed Brewing of Seaton ran the bar, while Fluid Productions organised the sound and lighting, and the team from CN Events gave their time for free, as did Mitchells’ auctioneer John Wharton who persuaded people to part with their cash in the charity auction. The money raised will be given to the Mayor’s chosen charity, Allerdale Disability Association.

The event was sponsored by the Allerdale Investment Partnership, Britain’s Energy Coast, Sealy and Iggesund.

Malcolm Wilson OBE said: “It was such a privilege to be the guest of honour at the Civic Dinner – surrounded by so many who have done so much for our region. The success that M-Sport achieved last year will be hard to replicate, but we’ve made a fantastic start to this year’s championship and have every intention of bringing more success back to Cumbria. I’m always extremely humbled by the enthusiasm and generosity of the people in our region, and that was the case on Friday evening with the money raised for a very worthy cause.”

Mayor of Allerdale, Councillor Mary Bainbridge, said: “The Civic Dinner is all about celebrating the achievements of the past year, particularly those by our guest of honour Malcolm Wilson OBE, as well as supporting my chosen charity – Allerdale Disability Association. ADA is a local organisation which does wonderful work supporting some of our most vulnerable people. I’ve been blown away by the generosity of people and I know the money raised will go a long way and I’m so pleased to be able to help those most in need.”

Leader of Allerdale Borough Council, Alan Smith, added: “It was a fantastic night enjoyed by all, and I am delighted at how much money was raised for a truly worthy cause. It was also a real honour to have Malcolm Wilson join us as our guest of honour. The level of success that he and his team at M-Sport have achieved is remarkable, so I am thrilled that we were able to celebrate this and the contribution they have made to the area’s economy.

“It was great to see the leisure centre transformed into an amazing venue for the evening once again. I would like to thank everyone who was involved in organising the dinner, the CN Events team, the event’s sponsors and every single business who selflessly gave their time or donated prizes.”