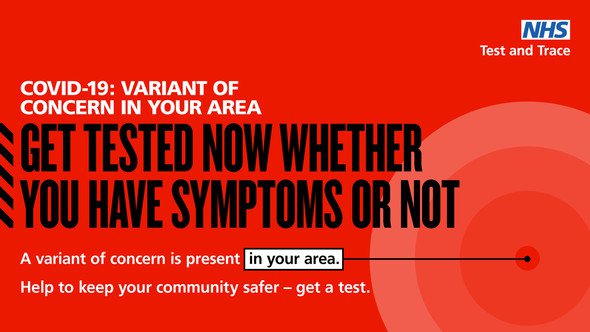 Cumbria County Council and NHS Test and Trace are asking every person living and working in Cumbria between the ages of 12 and 30 to get a PCR test for COVID-19, even if they do not have symptoms.

This is because new COVID-19 infections are rising fastest among this age group. By getting as many people as possible tested, those who are infectious can be identified and asked to self-isolate to help stop infection spreading.

Tests will be conducted using PCR test kits, not the rapid result Lateral Flow Device tests that are used for regular weekly testing.

People not at school can attend any of Cumbria’s testing sites between 8am and 8pm from 19 June 2021. You do not need to book your test, simply walk-in and you will be tested.

Parents/carers of school age children will be informed of testing arrangements by their child’s school.

If you cannot attend a test site you can get a test kit delivered to your home via https://www.gov.uk/get-coronavirus-test. Choose the “I have been advised to get a test by local Public Health officials” option.

If you test positive, develop any symptoms, or are contact traced following contact with someone who tests positive, you should self-isolate immediately.

“Infections are spiking in Cumbria and while they are still lower than our neighbouring counties, without action we can expect many more people to become ill.

“Infections are rising fastest among young people. That’s why it is critical everyone aged 12-30 in Cumbria take a PCR test this week – regardless of whether they have symptoms or not.

“Getting as many people tested as possible will help us find those people are infectious but don’t know it, this is an important way we can slow the spread.

“I know it’s an inconvenience to do this, but it’s a simple process and as we’ve seen this week with the Prime Minister’s announcement, if we don’t get the virus back under control we can expect restrictions to remain in place which is something none of us want.”

Infections have risen from 35 cases per week at the end of May to 250 per week now, and concerns have grown that many Cumbrians remain vulnerable to the virus.

Nearly 150,000 Cumbrians have not been vaccinated yet and around 85,000 people have so far only received one dose of the vaccine. People who have only had one dose have significantly less protection from the new Delta variant of the virus which is now circulating.