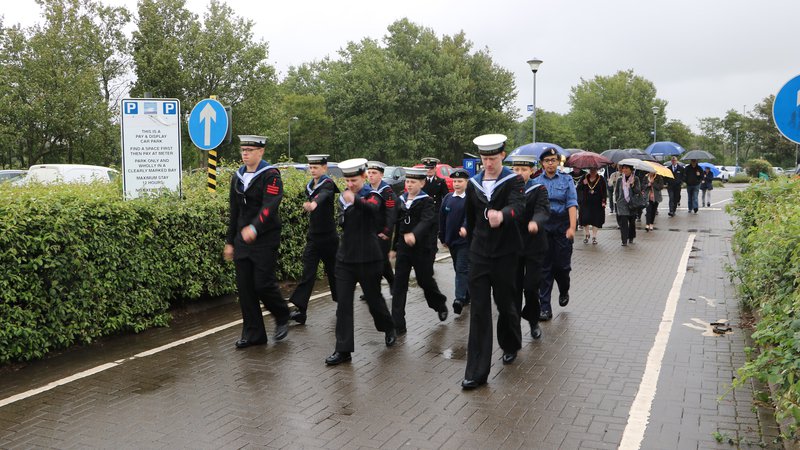 The Red Ensign flag is flying high over Allerdale following a ceremony led by the borough’s mayor to mark Merchant Navy Day.

Cllr Hilary Harrington, this year’s Mayor of Allerdale, hosted a flag-raising ceremony at Allerdale House, Workington today to celebrate the contribution the Merchant Navy has made in the UK and beyond.

Merchant Navy Day, officially celebrated on September 3, is a chance for people to show support of the men and women for the Merchant Navy community, which includes personnel and their families, veterans and the cadet forces.

Members of the public, Allerdale Borough Council staff, councillors and dignitaries joined young cadets at the event to take part in a parade before gathering in front of the flag pole.

At this point Cllr Harrington made a short speech, highlighting the importance of the Merchant Navy, before raising the Red Ensign. It will stay raised for the rest of the week.

The cadets in attendance were made up of representatives from Maryport’ Solway Sea Cadets and Workington Sea Cadets.

Cllr Harrington said: “The Merchant Navy rightly deserve recognition for their contribution to life in the UK and overseas. It was a pleasure to raise the Red Ensign for them and we hope many other places across the country will join us.

“Despite the weather being against us, a good number of people joined us for the event and we thank them for supporting us.

“It is always special to get young people involved in events like this so it was brilliant to have representation from two cadet groups. I hope they enjoyed the day.”

The ceremony took place in front of a sculpture donated to Allerdale by apprentices at Gen2. The youngsters created the piece, designed to commemorate the anniversary of the D-Day landings, earlier this year and handed it over to the council. It has now been put on permanent display at Allerdale House.