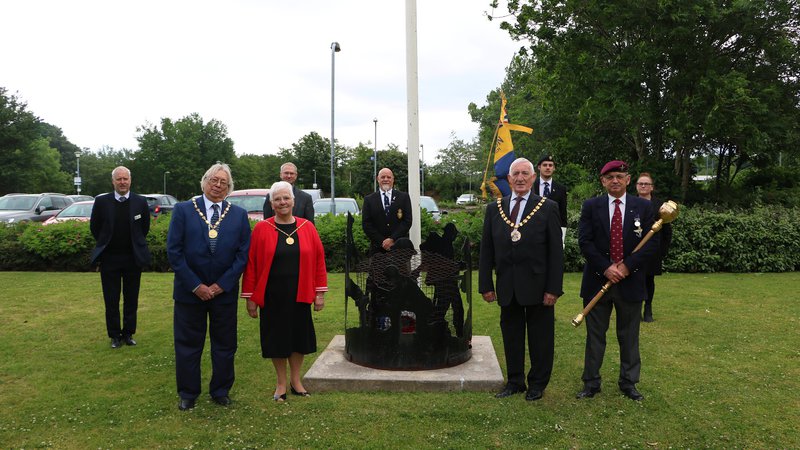 A new Armed Forces Champion has been appointed to represent Allerdale Borough Council.

Cllr Alan Pitcher – who is also on the council’s Executive as portfolio holder for customer experience and innovation – has taken on the role which sees him champion and advocate on behalf of the Armed Forces Covenant in the borough.

The announcement of Cllr Pitcher’s new role is made ahead of Armed Forces Day, which takes place on Saturday, June 26. However, celebrations began across the country yesterday (Monday 21 June) with the Armed Forces Day flag being raised on buildings and landmarks.

A flag-raising ceremony was held in Allerdale yesterday at the council’s head office in Workington, led by the Mayor of Allerdale, Cllr Malcolm Grainger and attended by representatives of the Royal British Legion.

Cllr Pitcher, who represents the Wigton and Woodside ward, joined the army in 1977, aged 17. He went into The Royal Artillery, transferred to The Parachute Regiment 16 months later earning his parachute wings in October 1978.

He also spent two years training recruits in Aldershot, during which time he was part of the team that set up the pre-enlistment assessment course (PRAC) which was later adopted by the rest of the army. He was posted from there after attaining the rank of Sergeant and went back to 1 Para. He then left the forces in 1991 to spend more time with his family.

“It’s an honour and privilege to take on the role of Armed Forces Champion and represent the armed forces community within Allerdale and advocate our covenant.

“Making sure our serving and former members of the armed forces are supported through council services in the correct way is vital and I look forward to working alongside many organisations as part of the role.”

More information about the council’s commitment to the armed forces can be found at https://www.allerdale.gov.uk/en/council-and-democracy/armed-forces-covenant/.