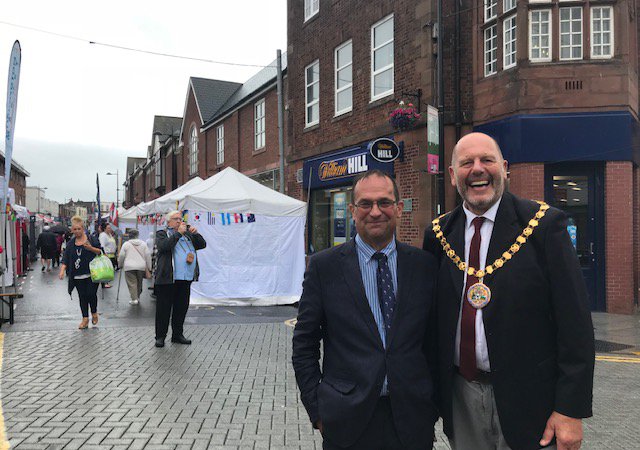 A new manager has been appointed to run Allerdale Borough Council’s markets.

This week the council officially took over the running of markets in the borough following its decision earlier this year to bring the operation in-house. Under normal circumstances markets are run in Keswick, Workington and Wigton with a seasonal market in Silloth.

On Monday (June 1) Phil Byers (left in photo above) officially took up his role with the council as Markets Manager, joining the authority from Geraud UK, the company who previously ran markets on the council’s behalf.

Phil had been in his former role for about 10 years having previously been a market trader himself for 20 years, running a successful plant business.

During his time managing markets in Allerdale, Keswick market was voted ‘2015 Best Outdoor Market in the UK’ and Phil was named Market Manager of the Year in 2018 by the National Market Traders Federation.

“It’s a pleasure to be joining Allerdale Borough Council to head up our markets operation. It’s a role I’ve thoroughly enjoyed over the last decade and I’ve met some incredible traders, locals and visitors at our markets.

“I hope to be able to continue to build on the success of the markets in the area and look forward to welcoming people back to them once they reopen.”

Markets have been suspended since late March due to the coronavirus. A consultation with members, town councils and traders about their reopening is continuing but the council has decided to not hold any until at least the week commencing June 15.

At the moment the council is developing different options for how markets can return in a way which keeps staff, traders and members of the public as safe as possible. These options will take into account any additional measures that may need to be put in place when town centre shops reopen to ensure social distancing guidelines can be met.

“We’d like to welcome Phil to the Allerdale team and we’re confident he will help us make our markets even better.

“Phil’s experience in running these markets for many years, as well as being a trader, will be vital in help us to run the markets successfully in-house. Markets will play a vital role in helping the council to deliver on its strategy of creating thriving towns and helping businesses in the area to flourish.”