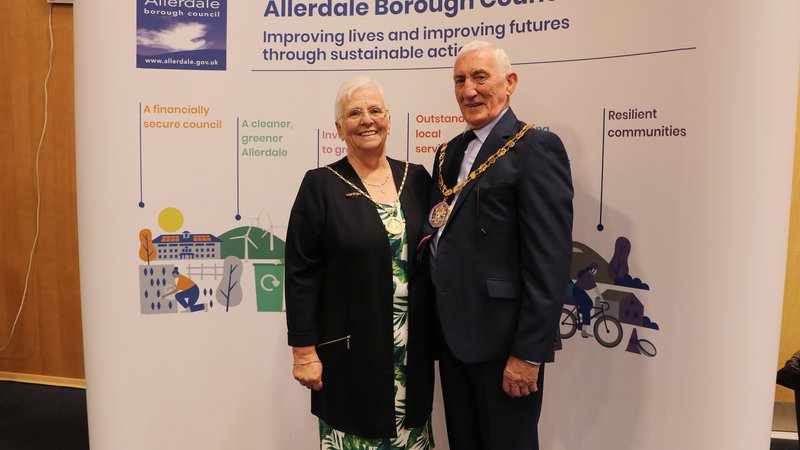 A new Mayor of Allerdale has been appointed for the forthcoming year.

Cllr Grainger was elected to the council in 2015 and represents the Boltons ward.

His chosen charities for the year are the Great North Air Ambulance and Jigsaw, Cumbria’s Children’s Hospice.

“It’s an honour to take up the role of mayor of Allerdale and I’m looking forward to raising lots of money for the charities and meeting many of the great people of this borough. I’ve been proud to serve as a councillor for many years and have seen the fantastic work that goes on in the area and I hope to see more of this during my year as mayor.”

Cllr Allan Daniels, who represents the Keswick ward, will serve as deputy mayor.

During the AGM the outgoing mayor, Cllr Hilary Harrington, thanked everyone who has helped her raise almost £5,000 for local charities during her term in office. Cllr Harrington has served as the borough’s mayor for the last two years, a term which was extended due to the coronavirus pandemic.

During that time she raised a total of £4,941 for two local good causes – the Allerdale Disability Association and We Will.

“One thing I’ve been really heartened over the last year is the way our communities have come together to help one another and support the most vulnerable. We, as a council, have obviously taken the lead in many of these activities. But up and down the borough local groups and volunteers have also provided vital services and assistance to people.

“I’d like to honour two of those groups tonight who have been my chosen charities. The first is Allerdale Disability Association who provide help and assistance to those who have disabilities and their families. The second is We Will who are an inspiration to us all, helping fellow young people with mental health issues – something which sadly has become more prevalent during lockdown.

“I’d like to thank everyone who has helped me raise this amount. I know it will be very welcomed.”