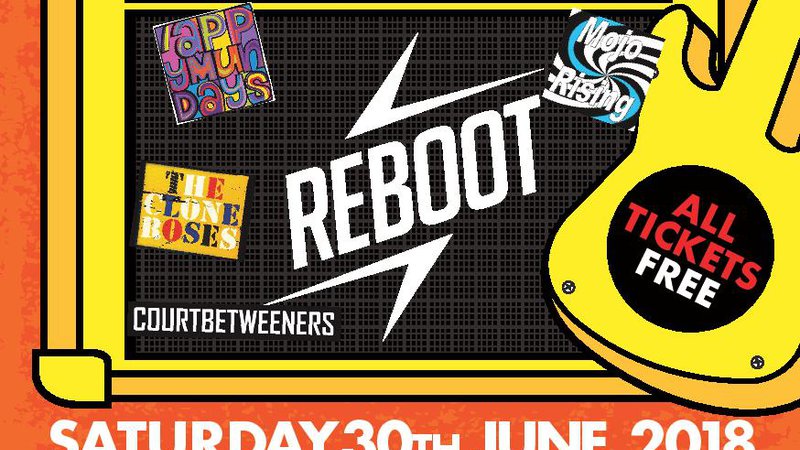 The organisers of Reboot Tribute festival have announced its return this year that tickets to the event will once again be free of charge.

A limited number will be available and must be booked via the CN Events website at www.cnevents.co.uk.

The event takes place on the 30th of June at the Workington Town RLFC at Derwent Park from 1pm – 9pm and promises to be a fantastic day out for the whole family.

The full line up is yet to be released but the headline act this year is highly acclaimed Stone Roses tribute, The Clone Roses who are described by The Stone Roses very own Mani as “The second best Stone Roses in the World!”. The band are also set to play Kendal Calling this year and will be supported at Reboot by Courteeners tribute, the Courtbetweeners amongst more to be announced.  Opening the stage this year will be Cockermouth based, Mojo Rising, a booking that has become a bit of a tradition for the festival having opened the stage all three years.

A second stage will play host to the best of Cumbria’s local music scene with performances from local bands and musicians throughout the day.

Councillor Mark Fryer, Allerdale Borough Council’s Portfolio Holder for Economic Growth, said: “Reboot festival is a brilliant family day out. It’s small enough for you to be able to take the whole family and big enough that you could have a really good crack. There’s something for everyone - young and old. The atmosphere the last two years has been great. This year’s event is promising to be even better with fantastic bands and kids activities - and all for free. As a Council we know how important festivals and events are in promoting the area, as well as boosting the local economy. That’s why we’re really keen to support events like Reboot.”

There will be a bar, a number of delicious food outlets and kids won’t be left out, with family friendly activities and entertainment on offer throughout the day hosted by the fantastic Rainbow Jelly. This year sees the addition of a new area which will be home to DJs and a cocktail bar.

The one-day festival is organised by CN Events and supported by Allerdale Borough Council. Workington Town RLFC and the Times and Star. Anna Chippendale, event manager at CN Events said “We’re delighted to be working with Allerdale Borough Council and Workington Town Rugby Club to bring Reboot back in 2018. The last two year’s events were a great success and the line-up this year is shaping up to be fantastic so watch this space. It’s a really brilliant day out for the whole family and a chance to listen to some of the nation’s favourite music all for free! ”

Tickets will be limited to 4 per person and all of those under 18 wishing to attend must be accompanied by an adult.