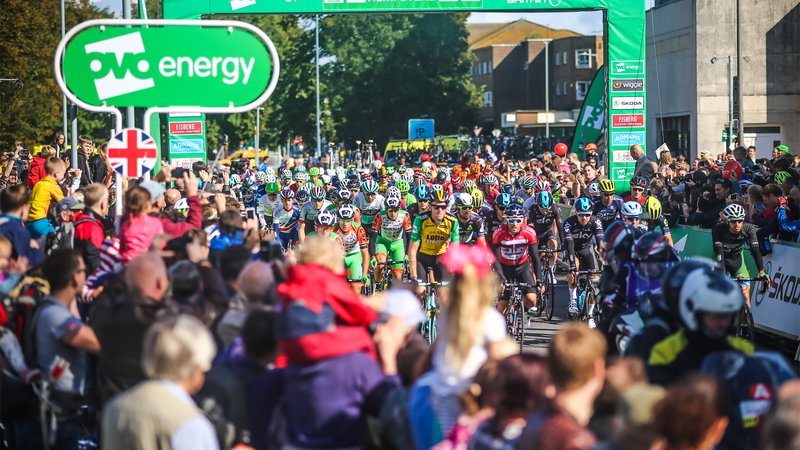 Strongest ever field confirmed for the OVO Energy Tour of Britain

The 2018 OVO Energy Tour of Britain, the fifteenth edition of the modern race, will feature its strongest ever field – including three of the top five-ranked riders in the world.

“As soon as I’d finished the Tour I knew I wanted to ride the Tour of Britain and race on home roads,” said Thomas. “It starts in Wales which will be special, and then I get to go and race across the whole of the UK. I can’t wait.”
Frenchman Julian Alaphilippe (Quick-Step Floors, world number four) will make his debut in the race, having won two stages of this year’s Tour de France and the race’s prestigious King of the Mountains jersey. He has only previously raced once in Britain, finishing third in the 2014 edition of Prudential RideLondon-Surrey Classic.

Gaviria has previously enjoyed success in the OVO Energy Tour of Britain, claiming stage wins in Blythe in 2015 and Newark-on-Trent last year.

The startlist also features two current national road race champions, including British champion Connor Swift (Madison Genesis), who is relishing the opportunity to wear the red, white and blue jersey in the eight-day race.
“It will be pretty special to wear the jersey - I can’t wait,” he said. “It’s the biggest race in Britain- it’ll be an interesting race; there are a few sprint stages, a few lumpy days.

“But maybe a breakaway or two will stay clear; it would be good to see some of the guys I race with on a weekly basis getting in the mix at some of the finishes and maybe even claiming a big win.”

Five reigning national time trial champions – including Thomas – will take the start from Pembrey Country Park on Sunday (2 September). They will have their chance to wear their champions’ jerseys on Stage Five in Cumbria during the race’s innovative, 14-kilometre uphill team time trial.  In addition, four medalists from this year’s Commonwealth Games on the Gold Coast, Australia, will take part. Among them are Welshman Jon Mould (JLT Condor), who took silver in the road race and hails from Newport, south Wales, where Stage One finishes.

In total, 11 teams from the UCI’s WorldTour (first division) will compete in the 2018 OVO Energy Tour of Britain, while 13 of the 20 teams took part in July’s Tour de France.

“There aren’t a lot of races outside the Tour de France with so many spectators, but the Tour of Britain is one of them. The fans are always making a very special atmosphere for all the riders and staff members,” said Brian Holm, team manager of Quick-Step Floors, the number oneranked team in the world.

Among the other debutants are Yorkshire’s Tom Pidcock (Team WIGGINS), the highly-rated reigning junior world time trial champion, and BMC Racing’s Tejay van Garderen. The latter has twice finished fifth in the Tour de France.
“The only time in my career that I have raced in Great Britain was at the 2014 Tour de France and I remember the crowds were amazing, unlike anywhere else I've ever seen,” he said. “I'm looking forward to that ambiance out on the road. As far as personal ambitions go, we will obviously aim high in the team time trial, and if that sets us up for a good General Classification result, then that's all the better.”

For the second year running, each stage of the race will be shown live and in full on ITV4. Presenter Matt Barbet will be joined former pro rider Yanto Barker and Rebecca Charlton, with Marty MacDonald and Rob Hayles providing the commentary. Eurosport will also air daily live coverage.