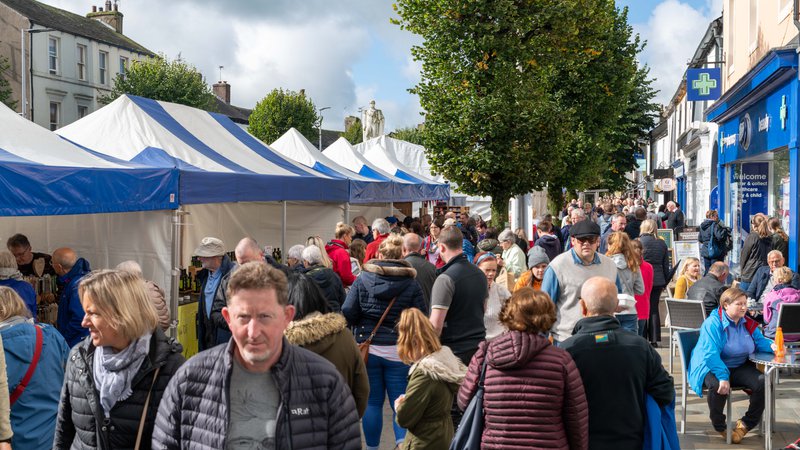 This year’s Taste Cumbria food festival has been hailed a success by visitors, businesses and stall holders with research showing that more than £2.2m was pumped into the local economy by the event.

According to an event evaluation by Red Research, Taste Cumbria – which was this year combined with the Northbound music festival – saw more than 25,000 visitors attend the event in Cockermouth.

It means that for every £1 invested in the event by organisers Allerdale Borough Council, more than £90 was put back into the local economy. The council took over the running of the popular event earlier this year from CN Events having previously provided funding for it.

Some changes were made to the festival this year, including the introduction of a markers’ market and a street party in Market Place. As well as the main market there was also live music in the pubs on an evening, a pop-up restaurant by Michelin star chef Ben Wilkinson of The Cottage in the Wood, a comedy night and a demonstration stage.

The evaluation report also highlighted that more than three quarters of people who attended made their trip to Cockermouth specifically for the event while 98 per cent of visitors rated it as ‘good’ or ‘very good’.

Comments made by some of the businesses included “better this year, the music is a good addition”, “love the festival, brings great business to my café" and “it’s been a success from day one and continues to improve”.

“When we took on Taste Cumbria it was important to us that we got the local businesses more involved and made the event work for them as well as locals and those who run stalls. So it is pleasing to see that all the businesses survey wanted to see the event happen again in the future.

“The council’s event strategy is about creating vibrant towns and supporting local businesses and as the report shows Taste Cumbria has done just that.”

The report also documented areas of the event which could be improved in the future following suggestions from businesses, visitors and stall holders. Suggestions included more seating in the Memorial Gardens area (Northbound), better signage and improved parking provision.

“We’d like to say a huge thank you to everyone who visited, ran a stall and supported the event this year.

“Events are a great way to stimulate the local economy and bring people into our towns and it seems the loyal following Taste Cumbria enjoys has been built on this time around. We will continue to work with our steering group, local businesses, residents and the stall holders to make future events even better.”