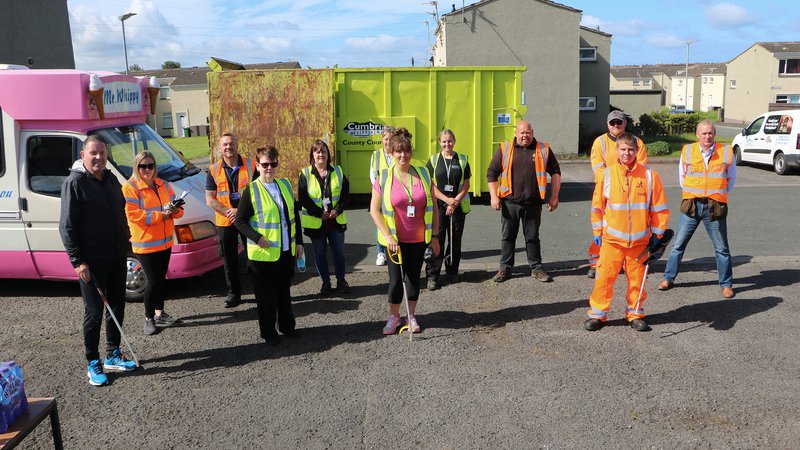 Council’s #OperationRespect campaign has been shortlisted for one of Keep Britain Tidy’s annual awards.

The authority’s efforts to make environmental improvements for local residents has seen it shortlisted in this year’s Keep Britain Tidy Awards.

There are ten award categories, each with three shortlisted contenders, and the council has beaten off stiff competition from across the country to become a finalist in the Initiative of the Year Award 2022 category for its #OperationRespect campaign.

The #OperationRespect campaign has seen a number of key partners work together to tackle fly-tipping in the area and educate local residents on the issue. These partners have included the council’s waste and street scene contractors AWS and Tivoli Services, Cumbria Police, the Environment Agency, Cumbria Fire and Rescue, Cumbria County Council’s community team, and local housing associations.

In recent months the campaign has seen community clean-ups, multi-agency enforcement activity, and a communications campaign highlighting some of the key issues associated with fly-tipping such as the need to ensure residents use registered waste carriers to dispose of any waste.

The awards recognise and celebrate local authorities that are committed to making significant improvements to the environment on people’s doorsteps, from community engagement work to waste enforcement work.

Keep Britain Tidy’s Chief Executive, Allison Ogden-Newton, said: “I would like to congratulate Allerdale Borough Council on being shortlisted for one of our annual awards.

“We know that people want to live in places that are clean and tidy and local authorities have a massive role to play in this and should rightly be recognised for their efforts.

“We are thrilled that so many authorities entered our awards and, again, the standard was incredibly high. We look forward to seeing representatives from Allerdale Borough Council and their partners at our awards ceremony in Birmingham in February.”

Cllr Jim Lister, Portfolio Holder with responsibility for Environmental Services, said: “This is fantastic news and much deserved recognition for the team’s work. A cleaner, greener Allerdale is one of our key aims from our Council Strategy, and #OperationRespect is one part of achieving this. Best of luck to the team, and fingers crossed that we’ll scoop the award.”

The Keep Britain Tidy Awards will be presented at the charity’s annual Network Conference at the Birmingham Hilton Metropole hotel on Thursday, February 10th, 2022.

Initiative of the Year Award 2022 nominees