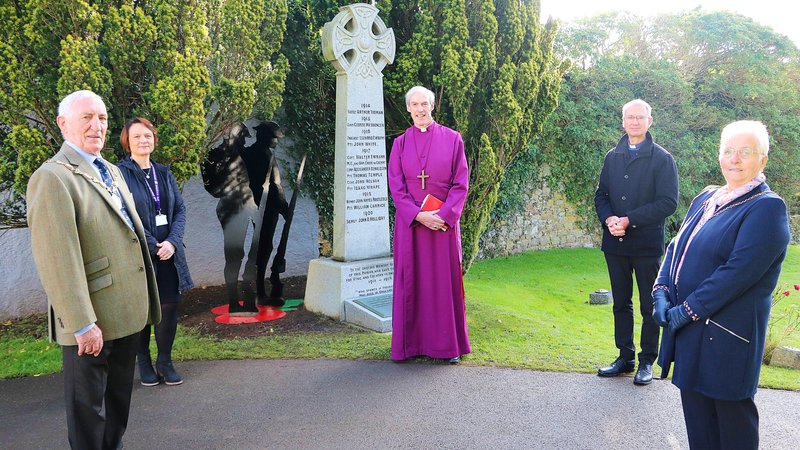 The Deputy Mayor of Allerdale, Cllr Malcolm Grainger has given his thanks to the talented students of Gen2 for their work in creating sculptures which are now pride of place his local churchyard.

Earlier this year in his role as Deputy Mayor, Cllr Grainger was invited to judge students’ work at Gen 2 as part of the annual apprentice challenge for National Apprenticeships Week. In groups, the apprentices are given a £200 budget and a two-week deadline to produce an item with the end results judged then donated to the community or offered for sale with the proceeds going to charity.

Among the items created were some silent soldiers which caught the eye of Cllr Grainger, who represents the Boltons ward on Allerdale Borough Council, and he asked if they could be donated to All Saints Church in Boltongate. Cllr Grainger, who lives in the village, has close links to the church and his wife Betty is on the parochial church council.

Due to the coronavirus the placing the silent soldiers next to the war memorial in the church grounds was delayed, however, they were unveiled earlier this month during a small outdoor ceremony with the Bishop of Carlisle, Right Reverend James Newcombe attending to give a blessing.

“The work the students at Gen2 created was absolutely outstanding and it’s a pleasure to have some of it in the churchyard. I’d like to thank the team there for all their hard work and allowing the soldiers to come to the church, they’re now pride of place next to the war memorial.”

Nina Dixon, Centre Manager for Gen 2, who are based at Lillyhall, Workington, said:

One of the soldiers has been dedicated to Rev Claire Spedding and family for her work at the church and the other to the parishioners.