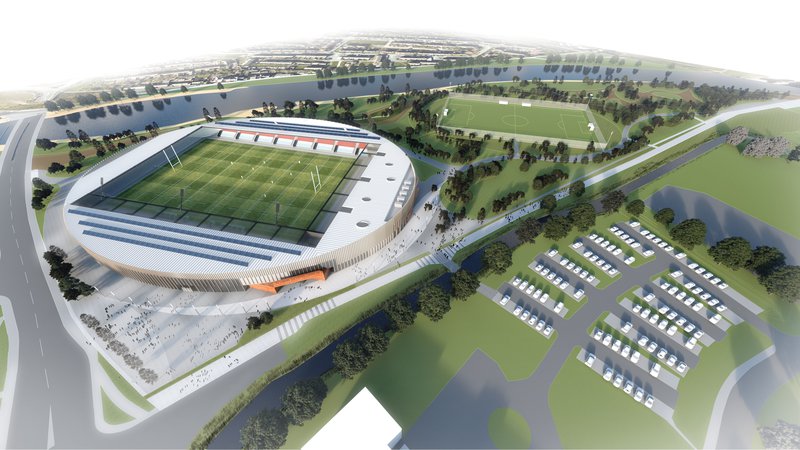 Early designs for the shared stadium in Workington

Ambitious plans for a new community stadium and sports development for west Cumbria have been released by Allerdale Borough Council.

The planned development would be situated around the current location for the Workington Reds' ground and includes an 8,000-capacity stadium and a full-size synthetic pitch for community use. There are also plans to open-up and enhance the local riverside area. The location was chosen after looking at a range of site options with Workington Town rugby league club and Workington Reds football club.

The stadium is due to be the home of both clubs. They have been working with the council after they jointly approached it to see if they could develop first rate shared facilities in the town which would benefit the clubs, players, and supporters. With shared costs and new, modern and more efficient facilities, the new stadium would make the clubs more sustainable and encourage a bigger fanbase.

The benefits of the stadium will also be felt by the wider community as it will also provide facilities for local clubs and help to inspire people, young and old, to take up sport. The landscaping work will make the riverside location more accessible and attractive for local residents - all part of the council’s commitment to improve the health and wellbeing of residents and improve towns in the area.

The council has acquired the land close to the planned stadium as a key part of its plans to open-up the whole of the lower Derwent Valley and continue the regeneration of this area. This comes on the back of the success of the new leisure centre, as well as the recent granting of planning permission for a hotel, restaurant and coffee shop in the area - making Workington an even more attractive town which will encourage further investment.

To meet the playing demands of both clubs, the pitch will exploit the latest hybrid technology using both plastic and real grass. Pitches like this are successfully in use in shared facilities elsewhere. Many of the premiership clubs use this pitch technology and it appeared at the recent World Cup in Russia.

The plans have been drawn up by architects Holmes Miller who are internationally renowned for building stadiums.

Whilst it is early days and no final cost has been confirmed, similar stadium developments have been built for around £15m. The council is currently putting together a funding package which could include grants, sponsorship and money from partner organisations so that the impact on the council tax payer can be kept to a minimum. In addition, it is hoped the stadium will generate its own income from conferences and events. The plans also include space that can be rented out to other occupiers - all helping to cover the stadium’s running costs.

Alan Smith, Leader of Allerdale Borough Council, said: “I’d like to thank the clubs for their input and support on this project. We’ve come a long way and these plans are really fantastic. This development will put our town on the map. It will build upon the success of the leisure centre and be something the whole of west Cumbria’s communities can be proud of.”

Mike Rollo, Commercial and Finance Director at Workington Reds added: “It has been an exciting journey getting to this point and I’d like to thank the council and Workington Town for their cooperation. There is going to be some intensive work over the next few months to get this vision to reality, but we are ready for the challenge. It is our key objective to deliver a strong sustainable future for the club and to bring our fans along with us.”

Barry Scholey, spokesman for Workington Town added: “The concept designs look fantastic and set the bar for the ambition we have for the facilities we want for our players, our supporters and the local community. Of course there is a lot more work to do but we’ve worked well as a team on this so far. If we are going to turn these aspirations into reality, we need to keep the momentum going whilst making sure that all of our requirements are satisfied. We also need to work it through our own governance arrangements at the club”.

A planning application for the development will be submitted in the winter. If approved it is planned the stadium will be completed in late-Spring 2021.