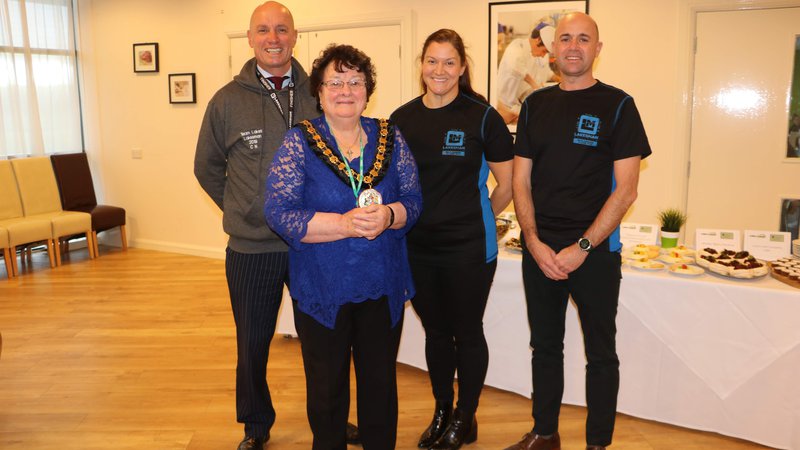 A team of athletes from Lakes College West Cumbria have handed over hundreds of pounds to the Mayor of Allerdale’s charity fund – after taking on a gruelling triathlon challenge.

The full race involves a 2.4-mile swim in Derwent Water, a 112-mile cycle ride out to the coast as far as Silloth before returning to Keswick to complete a 26.2-mile run. Chris completed the cycle, Kate was the swimmer and Daniel ran the marathon. Their total time was 10 hours and 59 minutes.

In total they raised £575 for the Mayor’s chosen charities for the year - the Allerdale Disability Association and We Will, a local group run by 14-18 year-olds from Ewanrigg in Maryport who are campaigning for more help for young people in west Cumbria with mental health problems.

“I would like to say a huge thank you to the team from Lakes College for their superb efforts in completing the triathlon. The money raised will go towards supporting the fantastic work of both my chosen charities who really do an unbelievable job in this area.”

The Lakesman is a joint effort between Lakesman Events Ltd, Allerdale Borough Council and GLL under their Better brand. Added extras for this year’s event included a kids’ race – the Lakesmini – and a pasta party on the Friday evening. An economic study of the event found that the event brought in more than £2.3m into the local economy.

“We are a community college and we are proud to serve our local community. When we were thinking about doing this challenge we wanted to do it for charity and wanted to pick good causes that would have a big impact on the area, the Mayor’s charity choices seemed like the ideal opportunity to do that.

“We were delighted to go through our endeavors to raise money for those charities that the Mayor is engaging with.”

A cheque was handed over to the Mayor earlier this month following a special tour of the Lillyhall-based college.