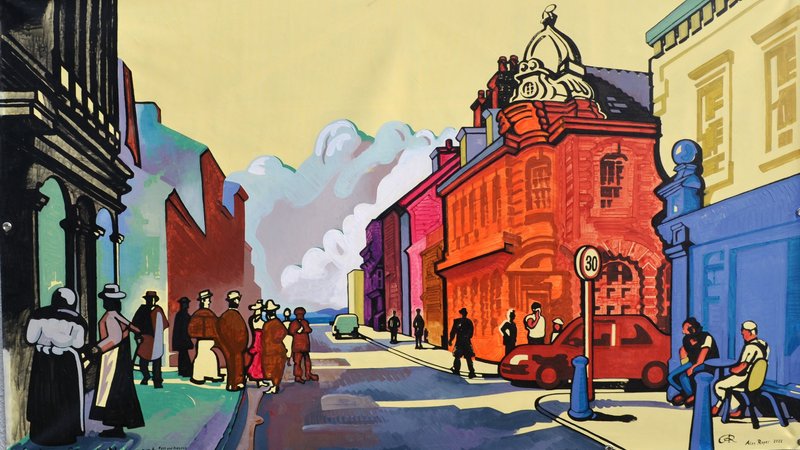 New artwork brings Maryport’s past and present together

A colourful new artwork which celebrates more than 100 years of Maryport’s history has been created for the town.

The canvas banner features the work of Maryport-based artist Alan Roper. It features Senhouse Street and takes the viewer on a journey through time as they cross the road. To the left is Maryport circa 1900, inspired by an old postcard Alan found, while to the right is the town today, complete with shoppers on mobile phones and modern street signs.

The banner was commissioned as part of the Taste of the Sea festival, which took place in August, and follows on from other work done as part of the Made in Maryport cultural pilot scheme. Alan’s first commission for this initiative was the bright Roman-themed mural which now surrounds the public toilets near the harbour.

Alan is a graphic designer who trained at Carlisle College and Newcastle University. He lives in Maryport, teaches art, and has carried out other mural projects in the town. One of the most prominent is at The Settlement education and creative hub – which saw him featured on BBC Countryfile – and he’s worked for organisations like the local Scouts, as well as taking on commissions in private homes and gardens.

Senhouse Street was chosen for this banner because of the transformation work going on there as part of the Maryport High Street Heritage Action Zone funding obtained by Allerdale Borough Council.

Alan said: “I’m really pleased with the finished result of the old juxtaposed against the new. I’ve used some artistic licence on the colours but I hope some of the landmark architecture is instantly recognisable to those who know Maryport.”

Councillor Mike Johnson, Leader of Allerdale Borough Council, added: “I think this is a brilliant new piece of art for Maryport and I can’t wait to see it on display. We will give it a permanent home in the new Maritime Museum in Christchurch, one of the buildings the Council is renovating as part of the multi-million pound Future High Street project.”

In the meantime, the banner is being displayed in the newly-renovated Town Hall foyer where Allerdale Borough Council staff are available, by appointment, to help with queries about council services. Please book a convenient time by calling 0303 123 1702.