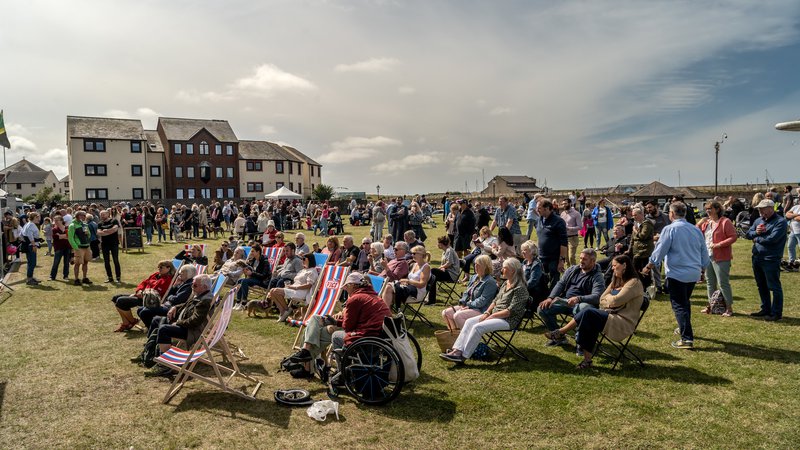 Taste of The Sea Festival in Maryport hailed a success

The evaluation report into Allerdale Borough Council’s Taste of the Sea Festival, held in Maryport on 14–15 August has given the event a big thumbs up.

The survey found that 65% of those interviewed had made their trip to Maryport specifically for the Taste Festival, and that the event had a wide appeal to many different people, including couples, extended family groups, and groups of friends. Some 60% of people at the event were with their partners, and 36% with other family members. Around 17% were with friends.

Overall, satisfaction with the event was very high. 93% of visitors rated the event very good or good. When asked to rate individual aspects of the event, ratings were also very positive. Asked if anything would have improved the event in any way, the majority of people gave positive feedback, saying it was great to see the town busy, that they want to see more events, and that it had made them stay longer in town.

Festival visitors made the most of their day out too, with 71% of those interviewed had been to the hot food court and beer tent on the harbourside, and two thirds had listened to the live music at Shipping Brow. Around 64% had visited the Producers’ Market, and almost half the food market stalls. A fifth had visited the children’s fairground and other family entertainment that was on offer.

Vendors at the festival said they would trade again at Taste of the Sea. Six out of seven gave the highest rating for how successful they found the event and comments included:

“Thoroughly enjoyed the event and it was extremely successful for me so not sure how it could have been improved”.

The Visitor Survey & Event Evaluation findings, carried out over the weekend of the event on behalf of Taste Cumbria by Red Research, reported that the visitor numbers were 7,000 across the overall event.

“We received some great, positive feedback about the Taste of the Sea Festival and I thank all of those involved for their efforts in producing a wonderful festival. Thanks also need to go to the customers, residents, businesses and traders who made them such a success.

"We hope to see it becoming a regular event in the Taste Cumbria programme and we hope to repeat this success at our forthcoming flagship event in Cockermouth on 25-26 September.”

*Details of future Taste Cumbria events can be found by visiting https://visitallerdale.co.uk/ and the council’s events team can be contacted by emailing ellie.jones@allerdale.gov.uk